Sorry it's been so long. Gotten a bit silly really.
Spent over a month molding, re-working, re-molding, casting, QCing several times, then packing and sending wave one of Clone O'Forms. Alongside Treegarr, this has been the most gratifying project personally, I've worked on. I can honestly say I would be happy to pay more than we are charging for these. MUSCLE/MIMP style minifigures influenced by Micronauts, and the wider Takara SF universe.
It was HARD. The hardest casting i've ever done. These Shapeways prints are great but merciless on the old fashioned silicone mold maker. At first I was precious about glossing, or editing the sculpts. By the 2nd (in some cases 3rd) mold I'd made on some figures, I was willing to do anything to the originals just to get a usable mold.

It all worked out in the end, and future runs should be a bit easier. 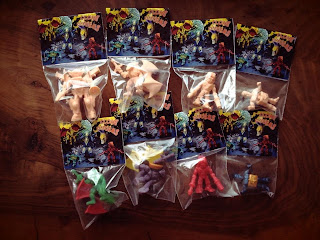 The flesh 4 packs sold out almost instantly and I smiled and groaned as pre-orders started racking up for more! Our other colorways are almost all sold out but I did learn that no one likes yellow toys like I do. Hmmm....


The Clone O'Verse is the expanse of galaxy that has been traversed by the Clones. The small, chestplate-bearing humanoids from their perspective. It also includes our Earth.
Each area within the Clone O'Verse is significant as the color/design of every Clone O'Form can tell you something about its origin. 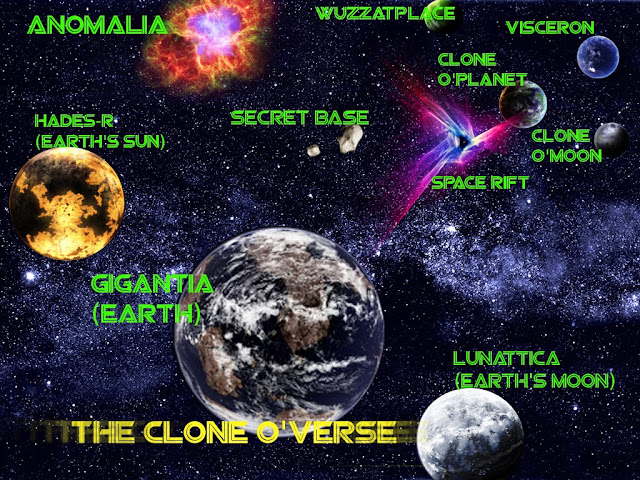 The Clones are a peace-loving race that originate from the Clone O'Planet. Through a space rift nearby they have been able to travel to Earth, to study the planets ecology and people. Their need to combat did not start until aliens from Visceron and Wuzzatplace also ventured to this part of the universe. These are aliens of varying intelligence, but are all dangerous, if not outright hostile.

Anomalia is a mysterious area at the distant reaches of the universe where beings of utterly superior intelligence come from, some of which have already appeared on Earth, such as the Golden Batt'l Bruiser to mediate the wars being fought between the descendant Clones living across Earth, and the hostile aliens that are invading, or already inhabiting earth as second or third generation alien descendants. This is why many of the Clones have human names and customs.

Time allowing, I plan to update this map showing the locations of each colorway and character.

MY FRIEND THE MICRONAUT.


Simply put, the coolest show BMT has ever been part of (given my personal taste). Check it out and you might understand why I love Micronauts so much. It's happening right now! http://myfriendthemicro.tumblr.com/

For this show, we introduced the Bermuda Anomaly. The oddly colored caste of Clone O'Forms that appear to have been battling within the Bermuda triangle since the 1960s. They are limited to just 3 sets! And I peronally feel it's some of the best work I've ever done. I have always loved neon orange with neon green. I had knock off Zaku puzzle when i was a kid with the Zaku in these colors and it had an impact on me. 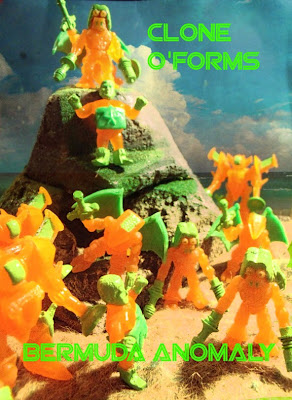 You may have noticed a relationship forming between Fantastic Plastic Toys and Bigmantoys. I sent over Mark a golden Treegarr Sapling to go with his golden MWOTR figs.... they sure went well together... 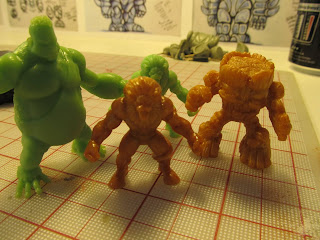 Now one thing I like to think FPT and BMT have in common, is doing everything humanly possible to make it count. Whatever you do, make it count. Maybe it's the wrestling ethos Mark and I are both fans of. Having the Sapling in a new colorway was not going to suffice. Not at all! Treegarr needed a reason to be on Earth, a reason to be wrestling, and MWOTR deserved something new.
So in secret, working many many many hours, I did this! 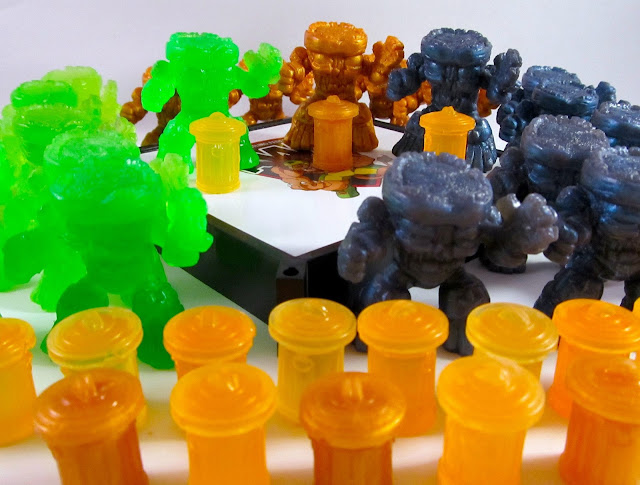 Believe me the QC was strict on these! These are the first resin figs in this line NOT produced by Marty Hansen. That, to be honest, is a sickening level of pressure. I have a bag of ugly ducklings as a result, but here are the brightest and best, with trash-can accessory, ready to get packaged up with lush FPT packaging, artwork by no less than 3 professional artists, and a mini comic! These should be dropping this month or next and are limited to 20!! 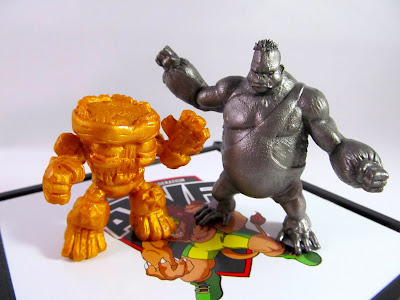 Niall of Man-e-toys kindly offered to take me along for the shits and giggles. I spent most of the time looking at women's legs. Got to meet Rich of Umetoys again which was fun, and inspired me to do a totally unmarketable figure from a conversation we had, I manned the Unbox table and got to sell some of my stuff, I met Gabe from Leucotomy (you shall know him well) again and had a laugh with him and his lovely mates, as well as Andy Kelly, and the amazingly nice organisers of the 'con.

Never been big into tats but learned a lot of parallels between the 2 cultures. A live of Jon Kricfalusi seems to be a universal thing, as well as taking your comic book influences, and trying to advance it into something more.

Also, I sold 2 of my new toy that I'm not pimping yet until it's ready.

Right, will probably be too busy to write again for a while so... See ya soon! :)

Posted by Bigmantoys at 13:36 No comments: