Hello to all the Russian bots that loyally check out my blog. It means a lot me.

Sorry as usual for people who like a bit of insight and/or aren't huge social media users for neglecting my blog. Here's what's been happening. 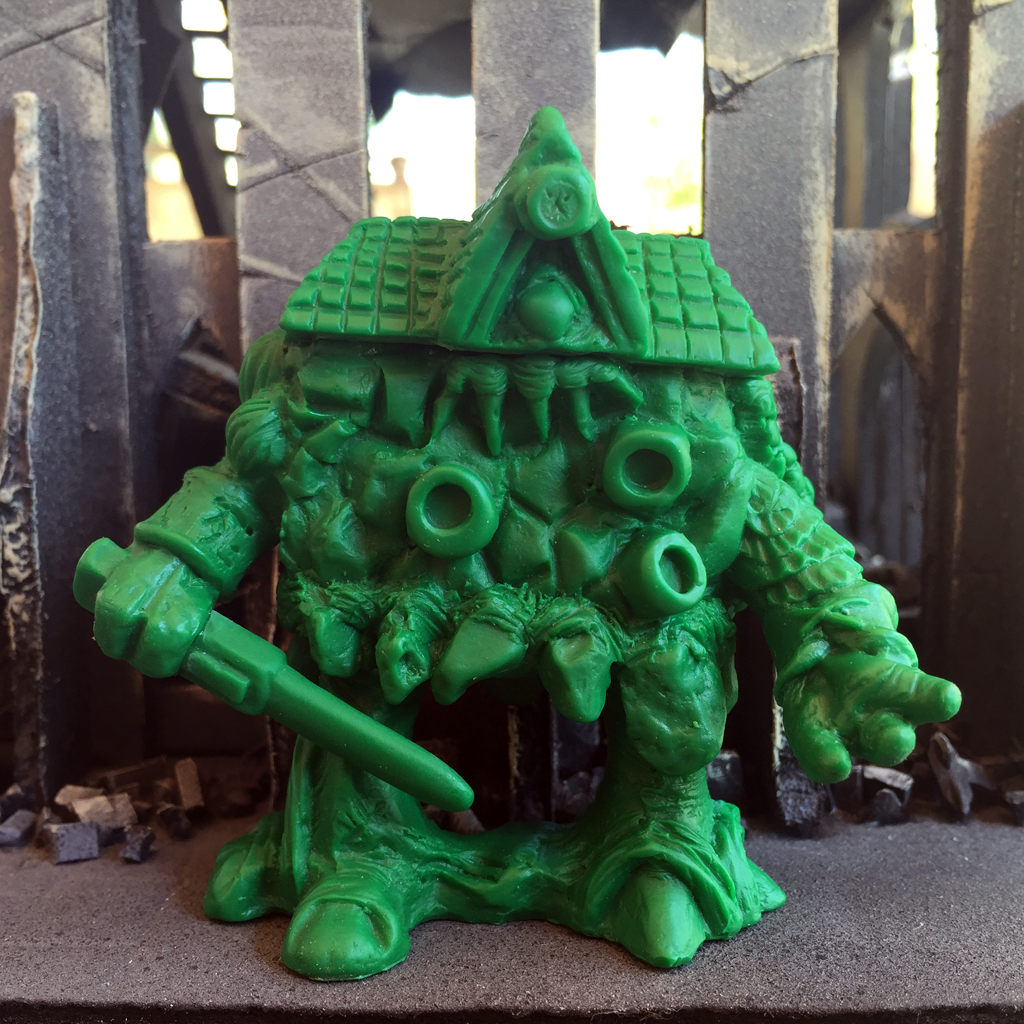 He's in my store.

For US customers wanting cheap shipping and to get him alongside other figures in the Unbox Industries Strange Monsters line, you can get him at the LITTLE RUBBER GUYS store.

We had enough made that I knew they'd last but numbers are now getting very limited, with numbers getting very low at the LRG in this military green.

When something's hard to make and you don't want to charge much, it's puts you in a spot. That's the point where art toys get expensive, or else people make themselves a one-off and leave it there. That's the small dilemma I have with this destroyed Nagoya diorama base I've made.

I know mini figure peeps like stuff that looks like a classic MIMP or MUSCLE, not a statue or a model. So i'll probably set up a pre-order for this fully painted version down the road when I get time. I dunno if anyone gets as much of a kick out of cracked roads and sections of river with a yellow speedboat on a base as I do. 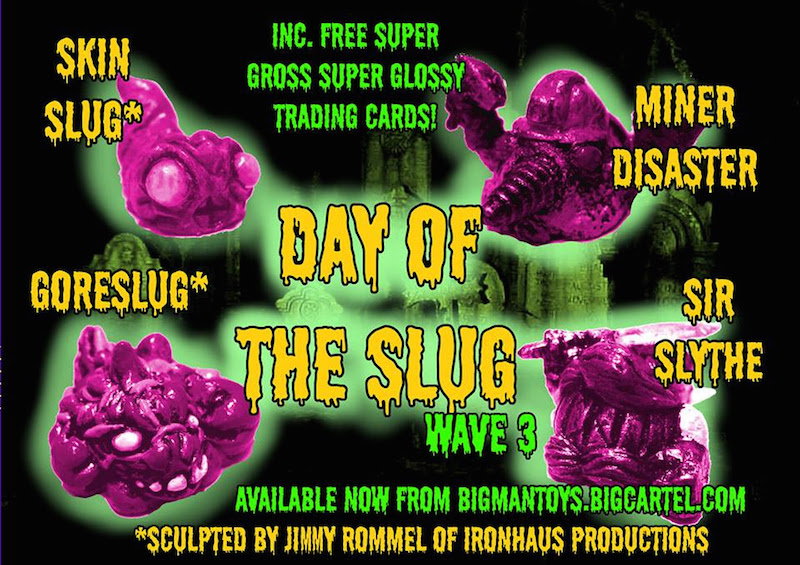 The slug invasion continues with 2 evil portal invaders by Jimmy Rommel, and 2 heroes by myself. Sir Slythe has chased the demon slugs through a time portal a-la Ash from the Evil Dead to the present day and been joined by the drill-nosed Miner Disaster in an attempt to thwart the growing evil slug invasion.

his time around, it's a purely pre-order system. I like making the one offs and if no one bought them, I'd be happy to fill my own shelves with them, but due to the cost of printing the cards and the amount of time I put into the artwork, it's been a labor of love I never expected to make any money from. However, for the hardcore that collect them, I will continue the line as promised for at least 4 waves.

I cannot stress how effing happy I am with this project. Got rubber copies cooking in the pot right now!

Let me start by telling you how deeply ingrained Puppet Master movies are into my psyche and how deeply I link them with MUSCLE figures.

Picture this - 1989. A weird little boy with a fat head, Hawaiian shirts, neon socks and laces, and a skateboard with a torch taped to the front ventures a mile from his house to the video shop where him mum's best mate works. She's a nice lady but has no concept of rules, laws, or what's suitable for kids. She let me take out any video I wanted for free. Puppet Master was my favorite film. I didn't really get the story - I just liked how creepy the puppets were. I always had fantasies about going to the toy shop and seeing ANYTHING to do with Puppet Master in there. Minifigures would have been perfect. I played with MUSCLEs in my little shoebox city I made with Puppet Master on pirated VHS in the background, between playing in the woods, playing Double Dragon at the leisure center, and trying to be inappropriate with the girls next door.

I have distinct memories of using Screw-kid as a stalker in the Puppet Master style, for my larger figures in horror scenarios.

I learned Z-brush. It is the future. I don't think I could ever sculpt this much detail on a mini with the skills I have.

I printed some test shots in  plastic from Shapeways to see the scale/standability. They were a bit small.

I printed super high detail copies at 20% larger and made molds.

I am making rubber copies. These will be available as soon as I have enough of a buffer to meet demand. These are 100% unofficial! Not endorsed by anybody other than me - just a genuinely loving tribute to 2 things that are dear to my heart.

I was asked by Awesome Toy in Hong Kong if I'd like to make a toy based on his Fake Baron vinyls. I was just getting to grips with Zbrush at the time and saw it as a great chance to learn some tricks and make something cool. There were molded from a high detail print and cast in red rubber. So far only available in East Asia at conventions, but I hope to be able to make flesh runs, neon runs, etc down the road soon. Awesome Toy is a legitimate and busy company so how long that takes is down to when they get time to market it I suppose. Hope it's soon! To all the people that already know about this and have been asking re: availability. I won't leave you hanging - just out of my hands right now :)

One of these left. Only for the hardcore! My first 3D sculpt, kindly printed by my good friend and fellow pervert Fernando Rijpkema, and smoothed and painted by me. The Treevil one stomping across the bloody rocks of the Fright Zone!

I know it doesn't do me any favors, but I can't help but be put off by any element of elitism in the arts. Especially indie arts. And especially toys. It has to be fun and friendly or I'm just not interested. I've met enough charlatans to know nothing matters but the work. And insincere sycophancy has been rife in every endeavor I've been involved in.

Which is why I had an amazing time at this year's  RORC as a guest. I was in a room with a bunch of absolutely stellar toys designers/makers. I was happy to be representing Mystical Warriors of the Ring on my table too. Made some legit friends that I know I'll stay in touch with.

I didn't get to go to any of the presentations as I was manning the table, but I had enough fun chatting to people who buy my stuff, people who are just starting out with toymaking, and perving on cosplay girls. The free coffee and excellent banter made the 2 days fly by. Good times!