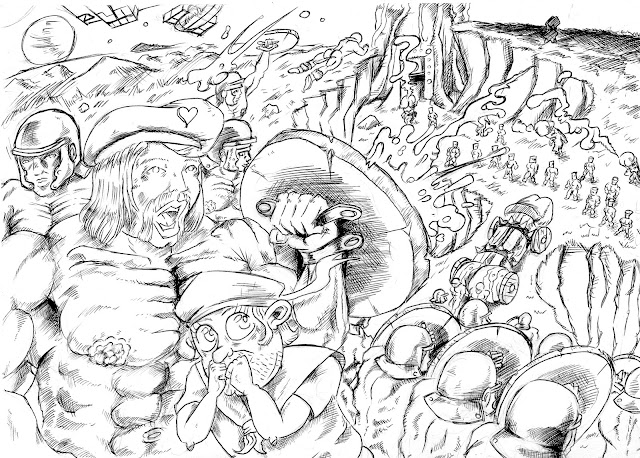 Another globulite of a Phalloclone's scalding semenite glubbage impacts Private Pump's shield so damn hard, the very sound hurts the delicate eardrums of little Skipper, who with small hands pressed at pudgy, stubbled face, cowers - terrified of the potential effects of that terrible dirty stuff!

"Gee, Pump! I don't know what's a boy to do with all this steamy hot man plasm flying around! I don't know if the troops will ever bust through that impossibly narrow pass with their bulbous and fantastic ram!"

For some strange reason, Skipper seemed to almost... giggle. Was it the sheer intensity of the enemy's frontline defense making him nervous?  Whatever it was they had in the swollen pulsating tower just over the bridge, it certainly seemed to be a source of importance. Why, erect and noble men from far and wide had assembled here today for whatever was through that hatch.

"My little friend. When we get back to camp, we will all eat our share of delicious steamed sausage and give our balls a good wash!" Pump smiled.

"My balls fucking stink! I've been marching for weeks and the vinegar rations are a poor substitute for creamy white COCK SOAP!"

No doubt whichever disgruntled troop it was that was responsible for this out burst could not be blamed. Pump all too well remembered long marches as he came up hard through the ranks to be erected as cock-sergant general of the Planet ErectPenis army. How true he stood this day. His knob completely blood packed. Although he knew, this might now not be enough.

For many years the men of this planet had successfully beat off any invading force with their simple tacdick of smacking the dick of the enemy with their own harder, bigger, and infinitely more vascular cocks. Many an invading race had been sent home dicks and spirits broken.

However Phallofax and his drones and clones had a superior tactic of thrusting with such efficiency, shields would shatter and vital organs would be exposed to rampaging dick! Many was the time Pump had seen comrades dragged away howling in pain to the back, to be put out their misery while their destroyed knob flopped like a hollowed out elephant's trunk. Phallofax's men could use their dick... to penetrate DICK!

Pump turned to see a troop on the left flank desperately trying to scoop out the burning hot spunk which had been fired with such velocity into his mouth, it had also broken his jaw and knocked out all his teeth in the process.

It was no good. The Pricktorian Guard formed a shield wall around the fallen man, trying to protect him but Phallofax's men, with ruthless efficiency, caught him with another shot as he turned his back in defence.

The shot powered right up his arsehole, infecting him with the Homophobos-Z parasite and breaking his spine in the process.

Also, his balls ruptured and the veins burst in his knob, it was horrible.

The troop knew what had to be done and managed to rise to his knees. While he trembled with the strain, two troops dutifully stood either side of him. At Pump's nod, they thrust into both his ears simultaneously and screamed to signify both honour, and sorrow. The man's knob was pulled off and put in a velvet box to send home to his family.

Pump raged. And the blood drained visibly through he veins in his neck, all the way to his knob.  There was a palpable crackling as the hard penis chassis packed out with an abnormal amount of blood. It became a shocking ruddy crimson, the likes of which even old Skipper had never seen. And he'd seen a LOT of cocks and dicks.

"Men! If we stand here strategising too long we're done for. I do not ask you to go to your deaths. I ask you to follow me and do as I do. This is not the time to protect your knobs, but the time to become an extention of them! We will fucking penetrate any dick that fucks with our dicks!"

A feint grimace followed by powerful sniff as the war aroma of old spunk fills his nostrils.