The reason I haven't been on here typing loads of stuff about all the stuff I've been upto is, I've been doing too much stuff to find time to write about the stuff - and that's no lie!

Acrozombies 2 LEFT!!! (and the Diazombie) :D   My sincere (actually sincere - this is my passion and it means a lot to me when people like it) thanks to everyone that bought one. They are flying, rolling their way to you right now. I hope you enjoy them!

There's a big stackload going on I can't talk about due to it being collaboration based and other people not being as keen as me to go "here's the shitty looking knockup I made that takes all the illusion and impact out of the toy before you've even seen the finished thing". All I will say is there are three people I have a lot of respect for and I'm really excited to be working with. Should be able to give you some hints on stuff as of next weekend.

But for now, I am making molds and nothing else. I could start casting on the side by I won't. I'll keep it stress-free and problem free this week at least. I can say no more.

I really like toys. Money has been going into my Paypal and straight back out to a degree. BattleGAze will continue shortly, alongside my forthcoming casting labours I have comitted to. To prove just how much of a toyman I am, here is a pic of Phallofax v.2 (with missing heart sticker FUCK!) and the great GORGAX  (of the Galaxxor universe) having a chance encounter while meeting in the middle of a city they were incidentally both destroying at the same time. Two Great Hates that Hate GREAT Together!!! 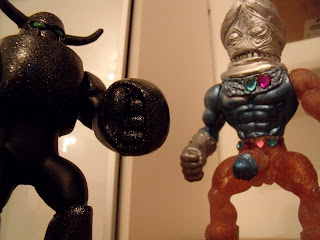 This is actually the FIRST ever resin figure I've bought (if you don't count the pervy anime kits I bought at the VERY FIRST Minami Anime 'con when I was 14! - Yeah, that's right, I'm no fair weather nerd!). I think the sculpt is awesome and timeless, the build is really dynamic and distinctly designer - I can't imagine this being in a box in a toyshop - there's something too understated and cool about it. Also, the paintwork is so cool. I love the feel of it, the glitter on my fingertips (I have a girlfriend) - this is a piece of art. Ben Spencer has really put together something that clearly resonates with a lot of people as they all keep buying them!. Not only that, but it's cast by TheGodBEast, who is one of the first people who ever inspired me to get into casting my own stuff. He was the main guy at Littlerubberguys.com, all those years ago, who really got it all going and started something huge. And now he's working with and on the coolest designer action figures in the world! (I swear i'm not kissing arse - these are people who help people out all the time anyway!).

I also have something else pretty fucking masterpieceful coming my way soon I'll post here.

On being a nerd, hoarding is obviously a big problem. I have to display my wonders on limited shelf space. I found a site with incredible 3.3/4 space stations and bases made form the old eighties building toy, Construx (just google "CONSTRUX" it's pretty niche but pretty amazing!). It is grey and blue. The windows are translucent green. It might be the most sci-fi friendly display accessory I've ever seen and it's stinky cheap on ebay!

So I manned-up, just for my girlfriend's sake to get us more space in out small home, and built this - The micro tower. Have it! 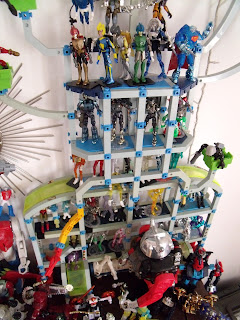 It's REALLY sturdy. You can actually work on it with figures still on, and it barely wobbles if you're careful. this lot cost me about a tenner! Pretty fucking swanky aye! 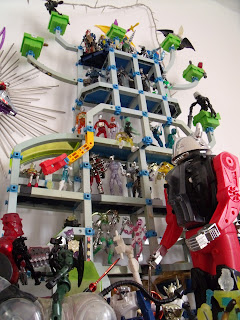 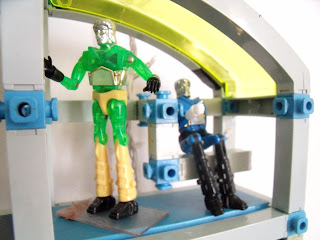 Anyway, so why I've made a decision to fully embrace my nerd roots - For one thing, people who spend decades trying to be cool, are the ones who never grow up, in my opinion. Earning what you get, working hard, being decent to people because you want to and have the strength to go through life without fucking people over, that to me is being an adult. Being a nerd means you are doing your own thing. Being what you are supposed to be is the way to go. If you're an unlikeable arsehole, maybe it's because you spend too much time doing and saying things you don't mean - or that you haven't been frank enough to get into what you really want to.

You are not trying to please people by changing yourself, and I'm proud to have always been that way. A lot of people might think being an adult who spends half his time on toys is not "winner behavior". There are people all around us who think they're better somehow because they're bigger/richer/skinnier/better read or whatever. I am doing exactly what I want to do. I do not compromise a single thing. I won't be found doing anything I don't want to do in the hope that people will like me. Rejection and acceptance are important to everyone to some degree, but I do know that people that don't accept you for what you are and treat you like you should be treated, can easily be replaced by people that do.

I'm tired and could go on. Thought this'd be better than nothing in lieu of clear toy news. See ya!