If you don't want to read all my waffle: Go to my Flickr (link on the right) to see all of the Acrozombies. And for buying, the info is at the bottom of this post :) 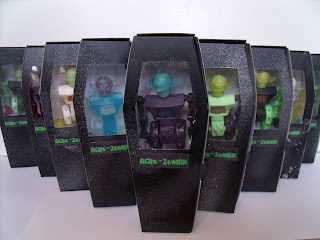 The threat of Acroyear invasion to the people of earth has been effectively stifled thus far by the efforts of the small race of extraterrestrials known as the "Micronauts" or "Micromen". Endless unseen wars have been strategically waged away form the eyes of the inhabitants of earth, often not far from where we sit in blissful ignorance, behind a paper thin facade of safety.

The effects of Earth's atmosphere have seemingly played little part in the outcome of the Acroyear attempts at attack and invasion. However, during the mid decades of the twentieth century, a foreign virus created an outbreak in what was called "zombification". Oft confused with the results of witchcraft, this scientifically explainable phenomenon caused deceased human hosts to attack, and devour still living human beings. Although the outbreak was eventually thwarted, the virus remained, and has been developed and experimented with, ever since.

During a routine expedition, a group of small Time Travellers were set upon by a Giant Acroyear and a small battle ensued. All parties involved were destroyed. The Armroids, small minions that can detach from the Giant Acroyear master to fight independently, were left largely intact. At some point in the 1990s, the US Government dumped waste that contained the virus responsible for the outbreak earlier that century. Over time, the buried bodies of the Time Travellers were infected, and able to partly re-animate, combined their own beings with the still usable Armroid units. A new organism was formed, but he Time Travellers lost their original consciousness, and took on the mission of invading Earth, with improved and lethal means. 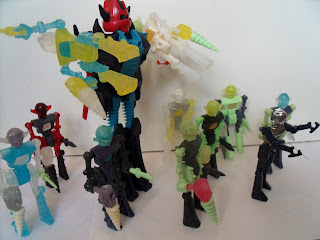 All figures come with exactly the same dimensions as an armroid, including the 5mm peg on the back. There are two head types, and two chest types. 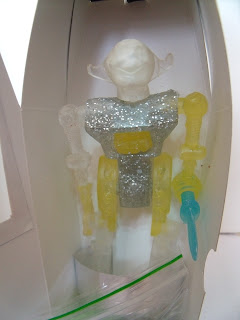 Here is an Acrozombie Skull Version. This is usually a case of contamination of the Acro-spherical helmet worn by the Time Traveller. His chestpiece is engraved with a bold but translucent "666". 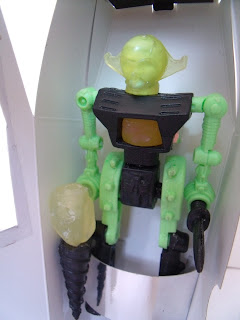 And here is a humanoid Acrozombie with Time Traveller head still not deteriorated. He is sporting neon pink guts in urine yellow chest piece.

I started this project a couple of months ago alongside a few other things. I intended there to be 20 or 30 affordable figures in all, but a few things went wrong with materials which meant either I'd have to buy more materials and charge more, or leave it at ten figures. So that's what I've done.

My main inspirations for this were: Martian invasions, listening to the Misfits discography on repeat, and 70s movies like Silent Running. Also, the yellow plastic of the 70s found in wonderful toys like the Mobile Exploration Lab, had a lot to do with it.

I really wanted to make posable figures that I personally would consider part of my Micronaut collection if I bought them. I knew there was no way I'd have the means to do something like Gold Dober's incredible Roboids or Flight Commanders. But given the reliability of everything having 5mm ports in classic Microman/Micronauts toys, I thought that a nice robust build like the armroid would be worth a go. 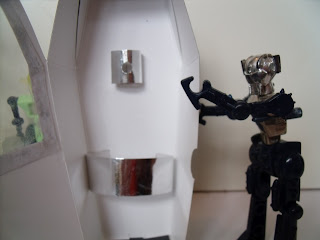 Here's an original Armroid showing you the luxurious furnishings YOUR AcroZombie will be travelling in! 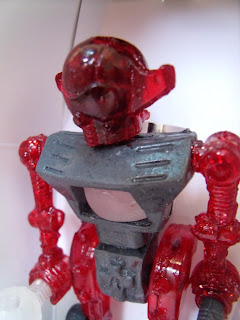 I chose the arms form an original Acroyear as the face vertical, rather than horizontal, and I wanted these to be able to hold weapons. And I definitely wanted to sculpt something myself so I can at least have some stamp  to call mine, rather than have a coll coloured bootleg. So I got to work on the Build-Ray. A basic raygun chassis with pegs and ports to incorporate with existing Takara/Micronauts parts. My first effort looked fine until I cast it, then I realised it looked a bit of a plain lump. 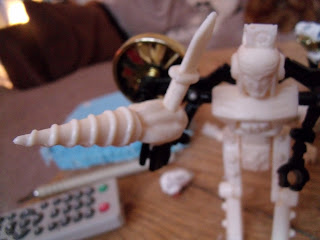 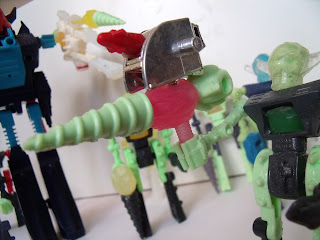 That's more like it!!! I took a cast and etched a lot more detail in, and added a hilt from an Acroyear sword. The peg on the front is kind of short still, to make sure the attachments are nice and snug. All the holes have been drilled with a 4.5 mm drill I bought especially for a nice tight fit. 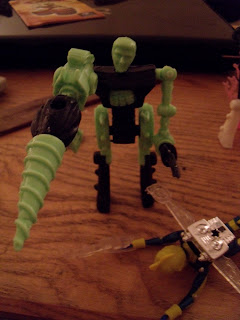 Originally, before I had any clear resin, the whole set was going to be in neon green, black, and white. The "666" chestpiece I sculpted often came out pretty crap with the neon pigment, full of dots etc, so I scrapped that for a smooth chest piece, in clear resin, with pink neon guts!!! 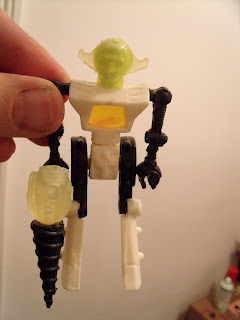 The packaging was always going to be a coffin. I found a company that makes custom boxes so all you have to do is take them out and fold them. My girlfriend and I cut the windows out (I can't cut) and put in the real nice acetate panes. Before all that I invested in some glitter spray Galaxxor style and spaced those boxes up. They feel and look awesome to hold. I'm so happy with the finished product. 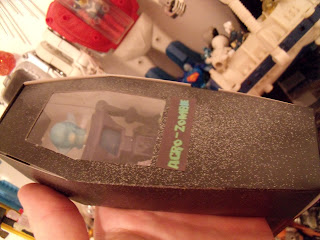 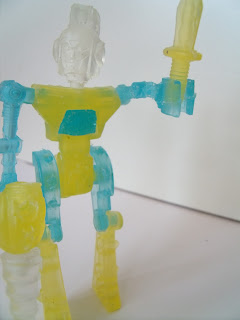 Diazombie-8 is the leader of the Acro-zombies. Purely by accident, he is also a completely unique figure. 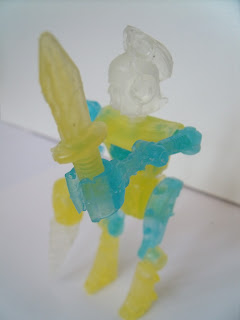 I took a GatsBlocker head from a broken figure, and added extra sculpting. I really like Greek history and am a big nerd for armour. I gave him a crest, an a Robotman style "ear". These were going to have 5mm holes drilled in to make them either usable as heads, or as "tanks" to attach to the build ray. The mold ate it after just two pulls and the original got busted up in the molding.
I'm going to make a unique box for him, then put him up on e-bay sometime.

You can e-mail me by going to my profile :)

You will notice a few of them are already sold. I am sorry. I've been doing this for the fun of it and have been showing off to my friends who've said "I'll take that one" to which I goofily reply "Awesome! Thanks!". This isn't me being an elitist nobhead. Next time, it'll all be for sale at the same time.

I thought this project was going to take a lot longer, as I never expected to have such ridiculous mishaps with my supplies. I only this afternoon made my mind up on a price. I worked really really hard on these for a few weeks, and if I knew at the beginning what I know now, I'd definitely be charging more, but there are mistakes I won't make again and things that I'll know to avoid so I'm letting these go at a pretty reasonable price because at the very least, it was a learning experience for me. These figures are POSABLE not PLAYABLE per se. You can have fun swapping the parts around, I know I have. I wish the molds had lasted longer. I had so many more colours I'd like to have done.
The arms should not be posed by holding anywhere but the shoulder, the thigh pegs are occasionally half a mm too small or too big bit here and there. I've dropped them numerous times and due to the chunky parts, they've never broken. These are better than I give myself credit for I'm sure, but I am selling these on the basis that they look cool, and have made pretty fucking awesome packaging to make sure they are displayed in peace.
15 minutes left before midnight. DONE!