Silicone for bigger scale figures. How the Hell do people afford it?

I must admit when I get a new batch in the post, I do tend to get a little silly and just make mould of anything i think would look cool in a different colour or whatever. However, time to get military with my resources.
I'm trying a method i'm sure must already exist, but as far as I know, I may have invented.
I'm casting a lower body for 5" a MOTU/Remco style fig. The legs are bent at the knee which means a lot of space to fill in with expensive silicone.
F' that! I've made 3 cardboard tubes and put them either side of the hip and between the legs. Once the silicone is cured, i'll pull the tubes out and fill the crevices with plaster and let it overflow so the surface of the silicone will also be covered in a layer of plaster. This means the 3 tube spaces will be joined up and the silicone will have a backing board that will not slip when the time comes to put the two halves together and pour the resin in. I hope this works as it'll save me money and allow me to be more ambitions with what I cast.
I'll put up a pic from my phone as i'm using a dying old laptop with only one USB hub. 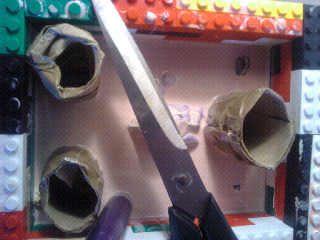