Just as I was really getting into the swing of things and knocking out something new almost everyday, I first have a problem with me resins killing my best and newest molds. Then, as a result of the soundproofing I've done on it, my otherwise very noisy compressor (and I live in a terraced house flat) starts overheating and f'ing up. It rapidly ran into suck country.

I've used the last of a batch of shit silicone to make a couple of molds that should hold up for the last of the Acro-zombies project. Then... rest.
Well sort of rest, I have a three big  pieces of casting work to do for one collaboration, one private commission (I've already been paid in toys), and something else awesome.

So by friday, I hope to be able to put pics of the guys up and put them up for sale. I have no idea what I should charge. I'm a skinflint and feel guilty charging any more than the costs of materials. Plus, I need space so I'm happy to sell my stuff off just to get it out of the way to make more stuff. I'll ask a couple of people who make toys what they think... I have worked my bollocks off on this project and that's no lie. 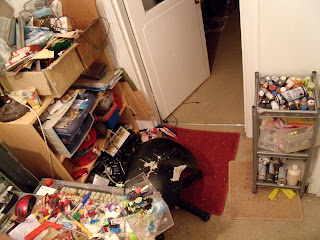 Here's my workspace. Ridiculous isn't it? We need to move.

Pieces for a Battle GAze collaboration are being sent off tomorrow. Might not be for a while but I'm dead excited to see what gets done with the parts I cast. SHould breathe some new life into the project and get me started on the female counterpart I'm tentatively titling "Battle Broads". I'm not a new man or anything like that but I personally dislike words like "Bitches" or "Whores" as it kind of makes the man saying it sound bitter and undersexed. I may be a pervert but I love womankind a great deal.

Saying that, here are some sexist sketches I did today at work that the office comic book nerds agree, is a pretty good build. Gonna be a similar style to the She-Ra rip off series "Golden Girl". Less doll like female figures with barbarian/sci-fi trappings.
Thinking of having some kind of "clip-on" clothing for them. Then again, I am actually pretty good at sewing. This is months off though. I've got lots to do before I get started on these. 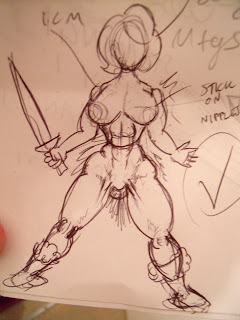 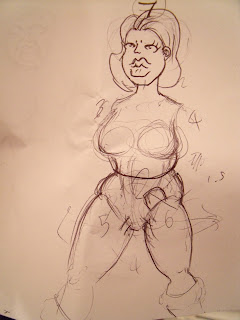