Why I work on the Mystical Warriors of the Ring comic. ＭＷＯＴＲ漫画を描く理由。 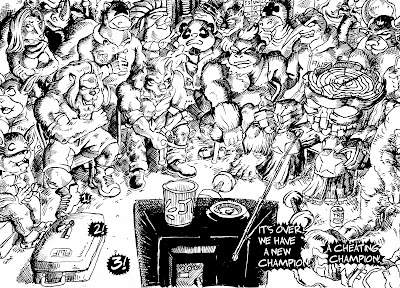 もし分けないけど、日本語ぺらぺらじゃない人なので、こんなに長いブロッグを英語と日本語を両方に書くのは無理なんですｘＣ。
簡単に説明すると僕が描くＭＷＯＴＲの漫画はＥＣＷプロレスのパロディ所が多いです。筋消し＋漫画＋リアルプロレス技＝これ！もちろん筋肉マン、日本プロレスなどの影響も強いですね。：）
ＭＷＯＴＲの消しはもう中国製なのでかっこよくて値段が低いです。消しはここに売店！
I'm in the middle of getting issue three done and I fancied a break before I repeat the process of pencil, ink, scan, and GIMP again.

On the very off off-chance that you don't know, Mystical Warriors of the Ring is a full production, original, fantasy wrestling minifigure series with its own universe and characters. Over the past year, Bigmantoys output, my art, and the MWOTR series has gone great, with all of us involved selling everything we make and with Mark Vasquez, the creator and head guy at MWOTR now getting stuff produced big scale in China.

It started off with Mark committing to a vision that most people I know well in the indy toy scene have, of creating a real, enduring minifig series. He used TheGodbeast for resin production, really in my opinion one of the people that created this whole thing before it was a thing. I remember looking at his stuff on the LittleRubberGuys forum and being hugely inspired, as many people were. This is where I saw OMFG get its first Kickstarter campaign going, and I found Zectron and Man-e-toys. Anyway, Mark found a one pager I did for the first ever HUSTLE figures and got in touch. 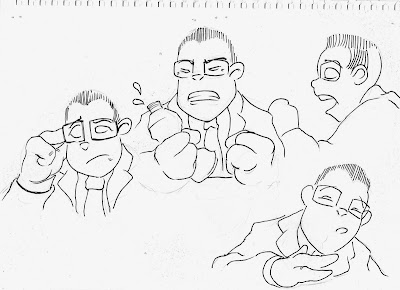 The reason I think we click so well is that A: We both love wrestling, B: We both really love minifigures, and C: It's totally non-ironic and very close to our hearts. To say ECW had a huge influence on my life would be an understatement. At the time, it was the best thing going. Full stop. The 90s produced a load of shit and a lot of cool stuff and ECW brought everything I loved at that time into one place. The two commentators are my way of living in 1998 Philly the whole time I'm working on the comic. The guy with the buzz cut is Mole E. Styles.

...who is 100% based on Joey Styles! I loved Joey styles so much. SO MUCH! In WWF, JR could narrate a great story from a great match, in ECW, Joey could take an ex-con who can't wrestle versus a fat piece of shit, and MAKE it into a story. It was everything I love about being non-mainstream. Indy metal, indy wrestling, indy comics and in our case indy toys. We're the guys making it for ourselves and each other. Our means might be limited but that doesn't mean we will make excuses for poor output. Joey Styles CRIED in the ring! For real! Same as Tommy Dreamer. Mark (Vasquez - MWOTR creator) is a similarly emotionally driven person and I love it. He used to go to Philly to see ECW live. That was the only thing I wanted when I was 19 - to go the ECW arena and meet Taz, Dreamer, RVD, Sabu, Styles, and Cyrus, yes Cyrus, aka the Jackyl. 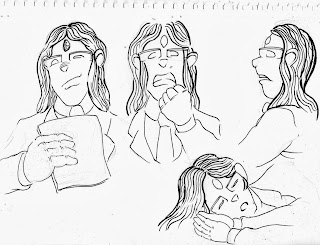 ...who is parodied in MWOTR by "The Weasel". Cyrus parodied Howard Stern in the WWF and in ECW was a perfect heel. Joey knew the name to every move ever created, Cyrus didn't care. Joey was one of the people, Cyrus was one of the network's people. He smiled when the face lost, and tried to be nonchalante about amazing matches (like the WCW commentators did without trying) on purpose. He wore designer glasses, and sometimes had a hippie jewel on his head. I dunno, people don't seem to rate him but I thought he and Joey were the best, and that's why they're (kind of) in MWOTR.

Going to a town full of working class people and playing the effete corporate arse-kisser has been done 1000000 times, but for what Paul Heyman probably paid him, he was some of the best added value I have ever seen on VHS.

As you might know, I did used to wrestle, and in decent promotions with good opponents, too. Of course I miss it. This is my way of telling a story, the same way a wrestler does in the ring. I'm working with Mark's characters and stories and adding sentiment to the action, which is ultimately what wrestling is all about.
I hope over the years, we create characters where people really care what happens in the next issue, who gets the belt, etc. Mark has had an actual Arcane Wrestling Federation belt made to make it all the more real.

So for me, this has been a great wave to ride. I've been able to re-interpret Kinnikuman comics into the elements of wrestling I like, have Treegarr (my baby) included in the figure series, and literally ping-pong ideas around with the ideas getting better every time Mark and I relay to each other.

Be sure to keep an eye on mystwarriors.com to see what we're upto!

Oh yeah, in case you got one, thanks for helping make the Wo-man drop a MASSIVE success. I've had to pause the pre-orders to catch up - and I never stop working!