Buildin' up my Shapeways store bit-by-bit. Really happy to see people aren't shy of plastic 3D printed figures and what a great format they can be for minis.

Abobo is my first fully-exclusive 3D print mini. I modelled him in Zbrush to look like the NES version. The flesxible plastic feels really good in hand and Shapeways' polishing is very impressive - especially at the price! Will hopefully get some time to do more figures in the line soon. He's already available at my Shapeways store, in a ton of colors.

I played Double Dragon at the local leisure centre as a kid so much, my mum got me my first console to play it on - the Sega Master System. I know it probably wasn't as playable as the NES version but I think it had nicer graphics. I can honestly say over the course of my life, including other platforms, I've played Double Dragon through about 100 times, and played it many more.

I've also made something fun to accompany the Puppet MUSCLE figures. TOULON'S EFFING CHEST! This is completely free to download and make, and really pops a Puppet MUSCLE display. Have a look, will you? 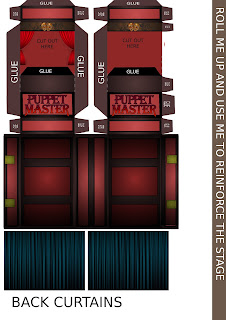 Other than that, yeah, the resin side has been quiet. The landscape of the "art-toy" scene has changed quite a bit since I started making stuff. I'll never quit but definitely sticking to my guns on making stuff I want to. Whether that means it will be considered less "art" despite having more craft to it or not, is not something I've never made enough money to worry about. Got a couple of toys (one as BMT, and another I just designed the character for) going into mass production this year which will hopefully take the heat off my need to spend tons of time casting, and focus more or using my imagination, sculpting, drawing etc.
New issue of Mystical Warriors of the Ring I can't wait to get started on too!

Posted by Bigmantoys at 06:57 No comments: