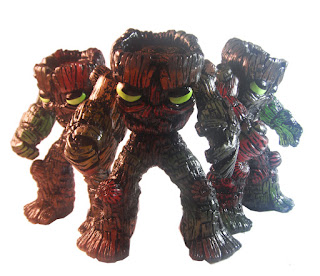 Going to try not to be smarmy here...

So about 6 months ago, I decide I want to make a 5.5 monster that is reminiscent of the Fright Zone playset for MOTU. I tried my best and to be honest, the result are pretty bloody great in my book. Galaxxor was a HUGE influence - taking the classic 5.5 buck and doing something new with it - chunkier, meaner.

Ben (Galaxxor) had a vision of a new type of Treegarr he thought might look cool and I cast up a few to his specifications. They looked pretty cool. You can find pics of the WIPs around. Then he worked his paint alchemy and ended up with this! Fuuuuuuuu!!!!! the Psychedelic Nightmare Edition! He f'ing immortalised them!

The molds for Treegarr have held up for 18 pulls so far - I doubt it'll hold for many more. I hope it does as I want exclusives for Toycon in London. But regardless, these are about as awesome a toy as I could hope to be involved in - happy as shit!! With Ben's paintjobs and re-imagining, especially what he's done with the eyes, this is seriously one of the coolest toys i've ever seen (obviously i'm biased but I speak the truth).
Posted by Bigmantoys at 09:55